A downloadable game for Linux

The stasis chamber hisses softly around you.  Artificial fluids built up inside your ears begin to retreat as the cryoplasm drains slowly.  Breathing comes naturally, at first. And then the tickle of a hundred nanites filtering your oxygen forces a cough or two of surprise.  Beneath new skin, a fresh infusion of blood pulses with the cadence of tribal drums.  Your thoughts cascade and it all makes sense again.  You open your eyes to the dull interior of a starship.

In the future, Earth has been relegated to an overpopulated and corrupt refinery in an otherwise barren region of space by the galactic community. Primarily facilitating the transition of imported Tetrazite, an exotic deep space metal, into Tetra — the interstellar standard. A currency used by every civilization in the known universe.

Weak governments and social upheaval has ushered in an age of dystopianism.  A world in which monopolistic corporations make the rules. Having normalized space travel with advancements in genetic engineering and propulsion, humanity set out to champion the frontier in hopes of discovering a new purpose.

Apsis Online is a multi-user roguelike (MUR) based on the First Paradise series. The game is presented as a series of both multiplayer and single-player "sequences" set in a dark science­-fiction universe.

You are a voyager.  A human, mentally and physically augmented for life in deep space.  Your mission is to carve out a place for humanity among the stars.  A largely hostile environment.  Build outposts with resources found at the farthest reaches of the frontier itself.  Survive, create new economies from scratch, capitalize and recruit others to join you.

Join the conversation on our built-in message board [at]Space!  Meet new people from within the speckled void.  Enjoy the imaginative flexibility of a multi-color ascii user interface.  It'll run on almost anything!  Only a keyboard and some duct tape are required to play.  Sign up today!

Disclaimer: Apsis Online is an ongoing project which means there may be occasionally be minor bugs in the software. If you find any, feel free to report the issue via the @space forums in-game. 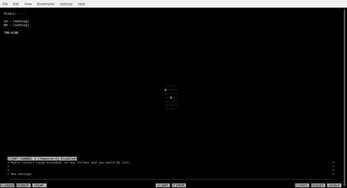